You are here: Home1 / Dinosaur Egg

A week ago, Chen Min, an amateur fossil collector living in Tanzhou Town, Zhongshan City, found a huge oval stone in the construction waste near the Wetland Park. Based on many years of experience in collecting fossils, it is believed that it is probably a dinosaur egg fossil.

At present, Dr. Wang Qiang from the Institute of Hypertension and Paleoanthropology of the Chinese Academy of Sciences has rushed to the scene for identification. He believes that fossils are red beds and are widely distributed in Guangdong.

The previous week, November 15, when Chen Min was walking in the Huafashui County Wetland Park in Doumen, Zhuhai, he stumbled upon the stone while looking at the wasteland of a nearby construction site.

“In the afternoon in the afternoon, Dr. Wang Qiang from the School of Medicine of the Chinese Academy of Sciences and the Institute of Paleoanthropology went to the discovery site.”

“It is because the egg fragments are replaced under the action of running water.” Wang Qiang said that the shape of the fossil is very important for studying the paleogeographic environment of its origin. Very enlightening.

“According to the available information, this is not the origin of the fossil. The rock discovered by Chen Min was soil that was shipped to Zhuhai for engineering purposes.” After on-site investigation and visits, Wang Qiang introduced some of the above. He said that the source of the dinosaur egg fossil discovered by Chen Min is unclear because the specific source of the soil cannot be determined. Dinosaur egg fossils produced in Doumen and even Zhuhai are still to be discovered in the future. 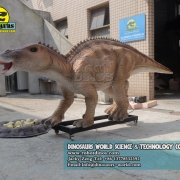 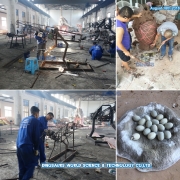 From the Kingdom of Tulips – the Netherlands, our customers’s fourth order coming
They are the most professional dinosaur museum in the Netherlands. We have already visited their exhibits, and the whole indoor dinosaur museum and outside dinosaur forest will bring you returning to the era of paleontology.
This time, client hopes to put some animatronic dinosaurs for indoor exhibition. Their orders include: Iguanodon, Herrerasaurus, Baby Triceratops, and Animatronic Tyrannosaurus egg and some small dinosaur nest. Two of which are Coin-operated, so customers can get Euro coins from tourists directly
Customers want to continue to make the Dinosaur Museum an entertainment and learning center for kids and with a special focus on young people. And we already cooperated with each other more than 7 years.